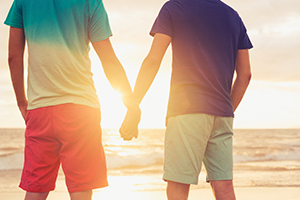 Same sex couple IVF is growing in popularity as a way for couples to start a family.  While many couples plan for the fertility process, many do not realize that getting pregnant is just the beginning of their journey to parenthood.  Being prepared for your baby’s first year is an important part of the same sex couple IVF process.

ith the government recently announcing the legalisation of marriage for same sex couples, it’s understandable that many parties are taking on a number of stances. Whilst religious believers question the nature of same sex marriage, another ‘hot’ topic has also made the headlines with the NHS raising the age limit for IVF treatment from 39 to 42.

Two very different, but altogether, intensely related and dependable matters that do not only raise their own questions, but also those that are entwined.

New Hope Fertility would like to congratulate our recent IVF success story, which comes from a same-sex couple, both women struggling with a history of primary infertility.

The 31-year-old woman completed  1 Mini-IVF™ cycle, with her 36-year-old partner to be the recipient.  Following her frozen embryo transfer with the embryo created from her partner's cycle, the 36-year-old got pregnant.  Congratulations to you both!
END_OF_DOCUMENT_TOKEN_TO_BE_REPLACED
0 Comments Click here to read/write comments

An Arkansas woman, Jennifer Huddleston, was visiting her local grocery store, Harps, when she saw a US Weekly Magazine protected by a covering that read: "Family Shield: To protect young Harp shoppers." What was the family shield protecting young Harps shoppers from? A cover photo of Elton John, David Furnish and their new son, Zachary, born from a surrogate carrier. Huddleston took a photo of the censorship and posted it to Twitter, and thus the day's drama began.

Harps has since issued an apology and has taken the shields down as a response to all of the negative press that they have been getting. They have also, however, voiced that they felt like they were in a lose-lose situation. Initially the shield went up because some shoppers complained that the content was inappropriate -- yet when they reacted to one set of complaints, the outrage rose to a much more monumental scale giving them far more press then I'm sure they would have liked.

What happened here with this once incidence in Arkansas, is probably indicative of a much bigger picture that is going to begin coming to the forefront of global consciousness in the coming years. Surrogacy and gestational carriers have been becoming more and more prevalent throughout the world with advances in medicine making it easier and easier for a surrogate to carry someone else's baby for them. In an earlier post we talked about Nicole Kidman and Keith Urban having their own child from a surrogate -- Elton John was just one more recent case of surrogacy made visible because of the fame that is associated with the recipient.

Because surrogacy is such a new concept, many people still greet it with fear and hesitation. The same was true with early IVF procedures and reactionary concerns that we were soon going to all be having test-tube babies. This has turned out not to be the case, and in fact, IVF is now a fairly commonplace procedure allowing many women, who years ago would have not been able to be mother, to have their own children. Someday perhaps surrogacy will be the same, but for now, we still get some small and large daily drama when it hits our newstands, censored or not.
END_OF_DOCUMENT_TOKEN_TO_BE_REPLACED
0 Comments Click here to read/write comments

A survey conducted for Resolve: The National Infertility Association back in 2006 found that only about one out of every five employers cover fertility care treatments like in vitro fertilization (IVF). While the major reason that employers seemed to skip fertility treatment was concerns about what it would do to the premiums, over 90 percent of employees that offered fertility care insurance reported that it had not significantly increased their costs.

Michelle Andrews of the Post writes that, "Even if a plan covers IVF, it may cover only a certain number of cycles, or attempts, or cap the dollar amount it will pay for services… Other wrinkles can also trip up would-be parents. For example, Maryland's law requires coverage of in vitro fertilization but stipulates that it be performed with the "spouse's sperm," a tough hurdle for same-sex couples or those with male infertility problems."

Andrews cites a statistic from the Centers for Disease Control and Prevention that one in every eight couples of childbearing age is infertile. That's a whopping 12.5%, higher than many of the other ailments that are more commonly covered.

The Institute of Medicine has assembled a group of experts to deliberate on many of the issues surrounding assisted reproduction and fertility treatment in light of new opportunities and regulations that are coming into the forefront of public consciousness. One of the primary concerns is trying to determine which essential health benefits should be included in polices available through state-based insurance exchanges starting in 2014. Recommendations that come from this committee will go to the Department of Health and Human Services for approval.
END_OF_DOCUMENT_TOKEN_TO_BE_REPLACED
0 Comments Click here to read/write comments

ABC News just ran an article about a recent court case regarding surrogacy law in Connecticut. The court case was regarding legal guardianship for their two twins, Sebastiann and Lukas, now 2 years old, who were born in Connecticut through in-vitro fertilization (IVF) with a donor egg and a surrogate mother.

Because only one of the men, Anthony Raftopol, was the biological father, under family law he was the only one with full parental rights. When the couple tried to obtain a birth certificate, also naming Shawn as a legal guardian, they were told he had no legal claim to either of their children.

ABC's account quotes Anthony, who explains, "I work in another country and am on the road a lot. Shawn travels with the children and it looked like he was literally trafficking children across the border… He travels with whole file documents just to show them he is not stealing the children from me."

The 2-year-long legal battle for Anthony and Shawn Raftopol, ended this week with a happy outcome for the gay couple, legally married back in 2008 in Massachusetts. The Connecticut Supreme Court ruled that Shawn Raftopol, 40, does, indeed have full parenting rights, despite not being the biological father, because the couple had a valid surrogacy agreement. More generally, the ruling states that when two partners sign a surrogacy agreement in Connecticut, they are both entitled to having their names on the birth certificate, even if there is no direct genetic link, getting immediate recognition as a legal guardian.

This ruling sets a precedent for any couple, gay or straight, who hopes to have a child through surrogacy. Read ABC's full article.
END_OF_DOCUMENT_TOKEN_TO_BE_REPLACED
0 Comments Click here to read/write comments